How am I doing?

It has been almost four years since I've been providing these gift rocks for people like yourself.I was not clear about what it was that I wanted to do when I first started painting them.Initially, It was about finding a new medium with which to express artistic abilities. Then it became a spiritual journey.

I would go out to the ocean and collect only those rocks which felt good in my hand and had a flat smooth surface on which to paint. I figured that they would be best suited as "Meditation Objects" that people would use to focus their attention while meditating.I gave a few of these to friends along with a sheet of affirmations.More and more ideas came to me in the succeeding months.

Three years ago,I approached a woman from my church who ran the Calistoga Farmer's Market.She began renting me a vendors space so that I could begin to SELL these pretty rocks.Sometimes, I entertain the idea of being supported on a "Suggested Donation" basis, but I am afraid that I would be overwhelmed with work,and would go broke fast.

I recall seeing a ceramicist last year who had a booth outside a "Further" concert who seemed to be doing fairly well by providing a current generation of Dead Heads with pendants heralding expressions of "Peace" in different languages.These he had fired out of clay and was accepting donations only.I have no idea if he is still making a living this way,but his sentiment and cause were admirable.I however,need a steady income and the confidence that provides.

Well wouldn't you know, these rocks have begun to sell! I've learned what is a fair asking price for a desired result.Even when custom work is requested,I relish the creative challenge.It is a thrill a minute.Your suggestions have found their way to the market table and my enthusiasm grows.

Bottle stoppers,Magnets,Pendants,Stacked Cairns, Mirrored rocks and other unique items have been produced and have sold well.Many have suggested that I sell online.Although I've resisted this idea, wanting to maintain control of my inventory...the idea has not been dismissed out of hand.I suspect that I am a bit fearful of impending success.Perhaps this fear is unfounded, but the YOUR SPIRIT ROCKS!™ business is still moving at pace comfortable for me.

This blog was created to have you see the latest products and to be a part of the development of what perhaps could be a movement of sorts.You have talked to me about having workshops,and I still would like to pursue this idea.Is this something you would like?

Feel free to join this blog and give me some direction.I would really like to know where to go from here. 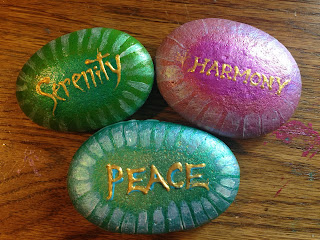 Posted by Christopher Sullivan at 10:16 PM