Best Wishes to all this Holiday Season. The following is a slideshow of the many rocks that have been painted and sold in the past year or so.The slideshow is an import from YouTube™ and it is recommended to view it in full screen which is entirely possible when you click on the image itself and click on the full screen icon.

In the beginning is a brief introduction with some slide effects that were just fun to show when adhering to the use of symmetry as a background device. Then comes this "meditation guy"doing his thing. Aside from the rocks, included are some pendants, keychains, Cairns, bottle bells, and wind chimes. These are some of the directions the rock painting has taken me.Incidentally, if you have purchased a rock in the past year I thank you for you patronage, and hope to see you again in 2023.

Posted by Christopher Sullivan at 1:40 PM No comments:

The Bling or the Glow

Sometimes I don't know. Which has more prominence ? These are considerations for every rock I paint. The bling usually includes glitter which I try to use sparingly. Yes, it is an embellishment. Glitter is bling, and what attracts attention during daylight.This bling factor can be an annoying though, if applied haphazardly.

The Glow paint on the other hand, can be difficult when applied unsparingly and against a color that don't offer much contrast. It is meant to be a surprise effect and a step in exploring other hidden features. Glowing puff paint can usually be appreciated only after it's been activated. Therefore, this feature has to have prominence in the dark. Invisible ink is used occasionally to showcase designs and figures that will only appear under a UV light.

A rock has three dimensions that are apparent. Hardened Puff paint on top of the rock will contribute this dimensionality. Adding de'coupage of a paper sample, or iridescent cutout may seem like mere decoration (which it is) but may still contribute to the overall gestalt of the piece.

Bobbles are something I may use to make a keychain, cairn, or pendant appear ornamental. These may have some foil reflection element glued to the back to make the bobble appear jewel like.

Below is are examples of that. 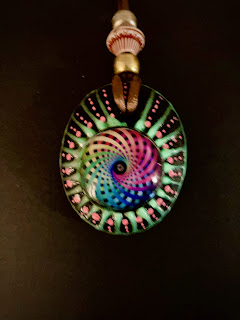 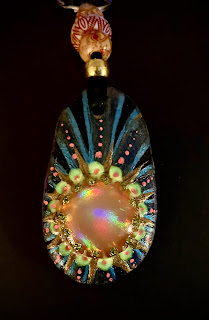 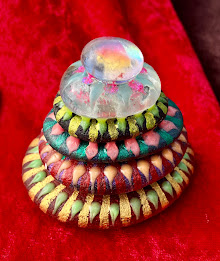 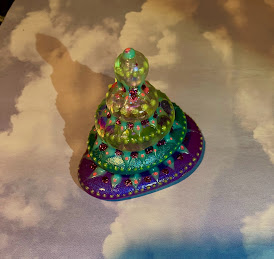 Posted by Christopher Sullivan at 5:32 PM No comments: