This week's rock is one that looks like an ideal rock to use for a canvas, that is a surface for your expression.Rocks that are smooth, symmetrical and flat are ideal for this purpose.A rock has to feel good in the palm of your hand.It has to call to your imagination and curiosity.It is sharing a specific point in space and time.This is an object that has (in all likelihood ) been on this planet long before you arrived.Perhaps it was the rock that made Australian Aborigines adhere to the notion that their ancestors are spirits alive in all natural forms such as trees, mountains and rocks throughout what is called the Dreamtime.

The Spirit of a rock is revealed in it's form and setting.Scientists tell us that all matter is in flux.Nothing is solid.This is apparently the antithesis of what we might imagine when we observe a rock, sitting in the palm of our hand.A rock is the focal point and a concentration of the elements that formed it.A rock's form is molded by that which it is impacted.Held together by complementary components, having been rendered by the elements of air, earth,fire and water.Rocks are very mysterious,indeed.It is my hope that you will explore all the mystery that a rock can convey. 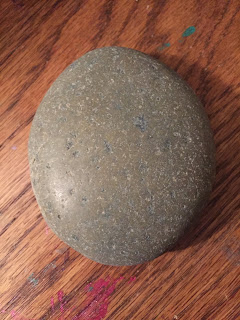 Posted by Christopher Sullivan at 6:30 PM No comments:

This week's rock was inspired by the sea urchins that can be found occasionally on the local beaches here in Northern California. The concentric design is appealing, and can be used as a charming meditation object.The variety of glow colors are added to make this a visually comforting device to have by your bedside at night. The glow can soothe the anxiety a scared child may feel after the lights are turned out. This rock will hopefully encourage parents to listen to the concerns and fears of their children at bedtime. When children see light (any light) in the dark, it gives them a spatial reference point. 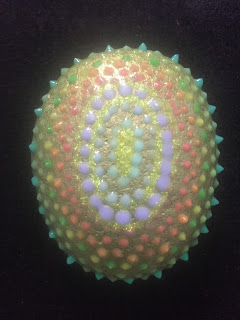 Posted by Christopher Sullivan at 12:57 PM No comments: