Yesterday, I met with my friend Marnie Cunningham.We worked together at the Culinary Institute of America at Greystone in St.Helena.She is a very warm-hearted person who is known and loved by many people in the town of St. Helena where she lives.Marnie and I have stayed in touch over the years and she has recently moved on from her position as Concierge at the C.I.A.

Well, yesterday we met for coffee and afterwards went down the street to the Episcopal church where a new Labyrinth had been constructed.It was about three in the afternoon when we set out to "walk the path" of this entire maze which lay before us.All in all, it took about 20 minutes(I am guessing, because the experience of time took on a curious point of focus for the both of us)

Then after we had traversed the path to completion, we reflected on what it meant to do this exercise.Interestingly, we both agreed that it felt spiritual and significant in a way that was not easy to articulate.She remarked that it was a good thing that I was wearing my "Spirit Rock" pendant, which I always seem to have on. Not thinking too much about it,I came to realize that I had one very similar one in my car which would be a perfect gift for Marnie.

She accepted it graciously and it now represents a certain spiritual bond that we both can share. I am truly grateful for our time as co-workers, but more importantly, our time spent as friends. 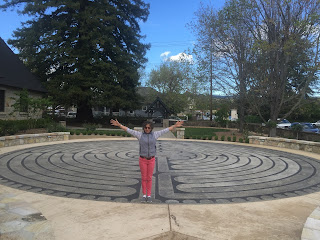 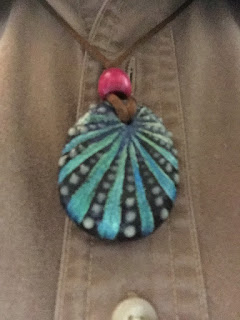 Posted by Christopher Sullivan at 2:59 PM No comments:

Reflections about the Blarney Stone

Erin go braugh, and Happy St. Patty's day! Being Irish as the day is long, I felt it was appropriate to post a little green Irish rock.We could call it the "Blarney Stone"but that name is already taken. The original Blarney Stone is on the uppermost level of the Blarney castle in County Cork, Ireland. It is said that the "Kissing the Blarney Stone" provides one with the "Gift of Eloquence." It's powers are unquestioned but its story still creates debate.

Once upon a time, visitors had to be held by the ankles and lowered head first over the battlements. Today, the locals are more cautious of the safety of it's visitors. The Stone itself is still set in the wall below the battlements. To kiss it, one has to lean backwards (holding on to an iron railing) from the parapet walk.Some claim that this was the same stone that gushed water when struck by Moses. Some say it was Jacob's Pillow, brought to Ireland by the prophet Jeremiah.Here it became the Lia Fail or "Fatal Stone", used as an oracular throne of Irish kings.

Others say that the stone was brought back to Ireland during the Crusades,and was the deathbed pillow of St. Columba.Legend also says it served as having the prophetic power of royal succession (i.e.the Stone of Destiny)

Below are pictures of the Blarney stone and below that,the little green rock painted to celebrate the feast day of St.Patrick. A four-leafed clover would not be appropriate, even though most people search for these items to bring them good luck.The three-leafed shamrock however, is a symbol of the Blessed Trinity which was explained to be the three manifestations of the one God (Father, Son and Holy Spirit).Allegedly by St.Patrick

So, after reading all this, Did you wear your green today, or did you get pinched by a mischievious leprechaun? Remember to wear green and kept my eye out for those pesky leprechauns who may surprise you when your least expect it! 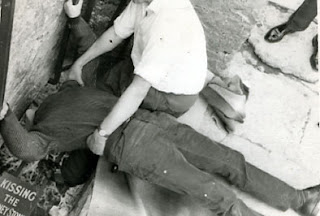 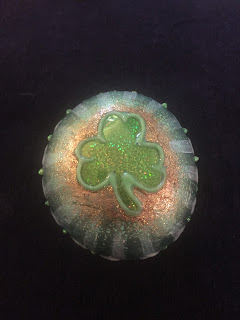 Posted by Christopher Sullivan at 11:43 AM No comments:

It is only March 3rd, and already we have storms backed up in the Pacific.This is a good thing of course, because our water resources here in California are in much need of replenishing.It has made it difficult for me though because when I go to the beach to collect rocks to paint,their seems to be a river that blocks access to the beach which ironically, usually is dry or easy to cross.Timing is essential when going to this particular beach where I get these rocks because rain or shine, one never knows when the river will be too deep to cross.You can bet though, that by July it will all be dry.

This weeks rock(s) are some I am preparing for Saturday's Market. These are all designs that have come to me in the past with slight variances in design.So,this week you get more than you perhaps expected.I've all three viewing states to give you an idea of what the rocks look like under a blacklight, lights out and in normal lighting. 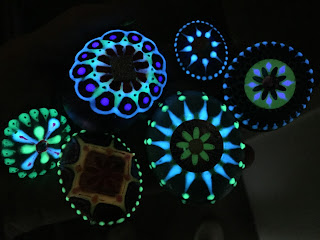 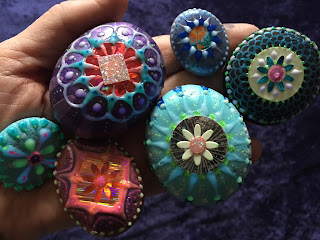 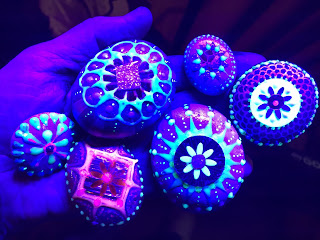 Posted by Christopher Sullivan at 2:23 PM No comments: