The fires from the lightning strikes last week have left their wreckage up and down the state of California. It is very heart-breaking to hear of people losing their homes, pets, cars, etc. I also think about those wild animals who also need homes, who don't have a clue where they will end up next.

Last night, on the rooftop of my apartment ( which has a flat roof by the way ) I could see the Klieg lights from the fairgrounds where all the firefighters are stationed. There are firefighters from as far away as New Mexico and Arizona. Large jumbo jets have flown over our area during the day dropping large loads of fire retardant over the still progressing fires and embers that have spread over the ridges in Pope Valley, right over the hill from where I live in Calistoga. Just when you think it's over, a news report of another fire and lightning storm has come upon us.

The smoke has been bad here, but not as bad as other places like Fairfield and Solano county. Now, wearing a face mask has a dual purpose. Covid19 is not the only thing that is keeping us indoors, or on the verge of evacuation. I will continue to pray for the safety of all concerned. The latest is about Hurricanes on the Southeast coast of the United States. Again, what is mother nature trying to tell us ? or... have we just gone beyond the point of no return? I certainly hope not. The pictures below feature some of the views from my roof and of course, the rock of the week. 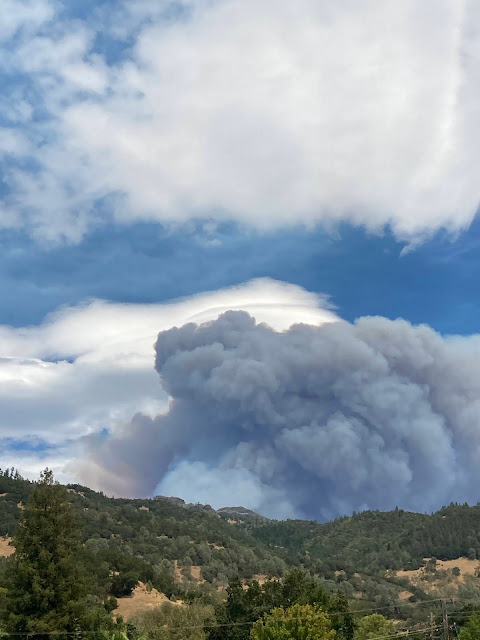 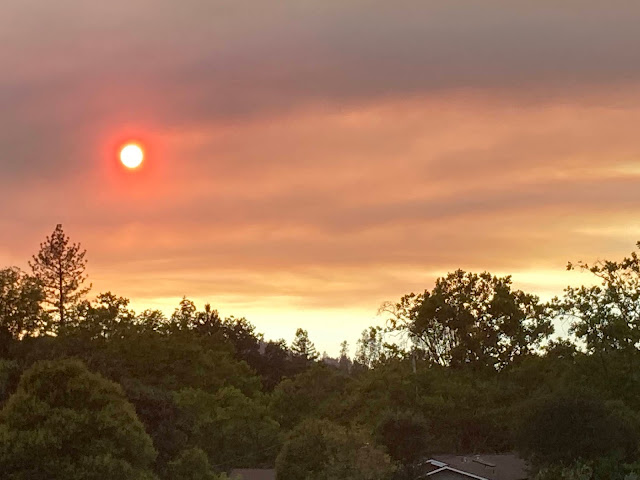 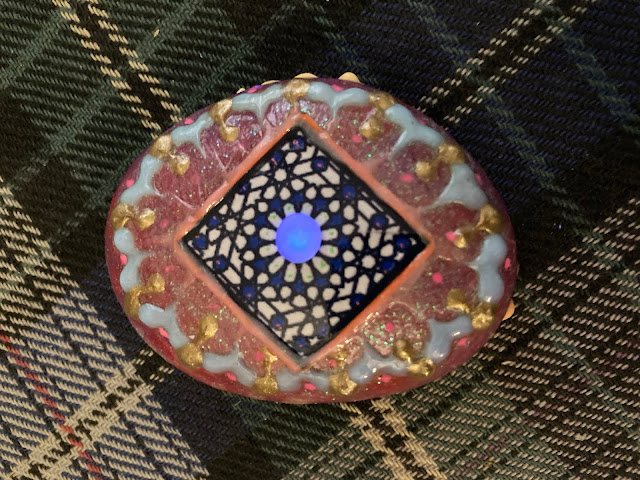 Posted by Christopher Sullivan at 9:38 AM No comments: 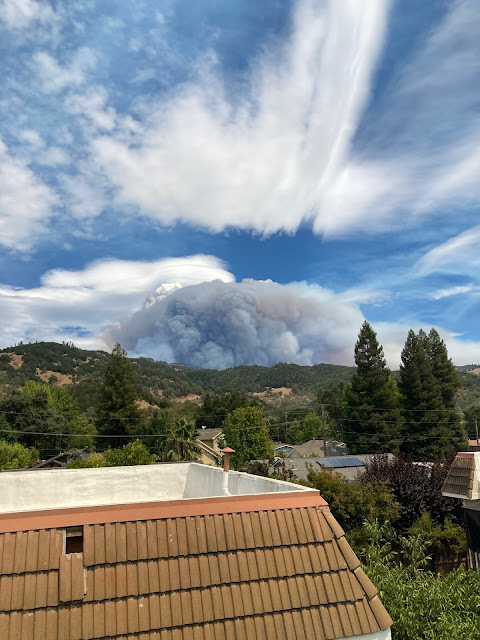 No thanks to Neil Diamond, but that album always makes me think of the sweltering heat and the tragic, as well as the glorious days of summer. This week has been no exception.

The fires have been an ongoing theme these past few years, whether being started by lightning or downed powerlines, dry vegetation is all around us just waiting to be ignited. Today, well over a third of the state is under the shadow of a mandatory evacuation because of this ominous trend.

Up and down the State of California, a very much-limited staff of dedicated firefighters are working tirelessly to contain a monstrous destructive power seeking to destroy communities throughout. Speaking of power, our own grid is hanging on by a thread.

Wearing masks to protect us now serves a dual purpose ( i.e. preventing smoke inhalation and deadly viruses ). Everyone I know seems to be making the most of a dire circumstance though. Some have taken to reading, writing, art, music, cooking, calling friends et al. These activities are vital to our peace of mind, both spiritually and psychologically. They are not meant to be distractions. Nuff said.

I realize that you are humoring me by reading this far, but hey... am I really all that boring? Now back to my present interest... 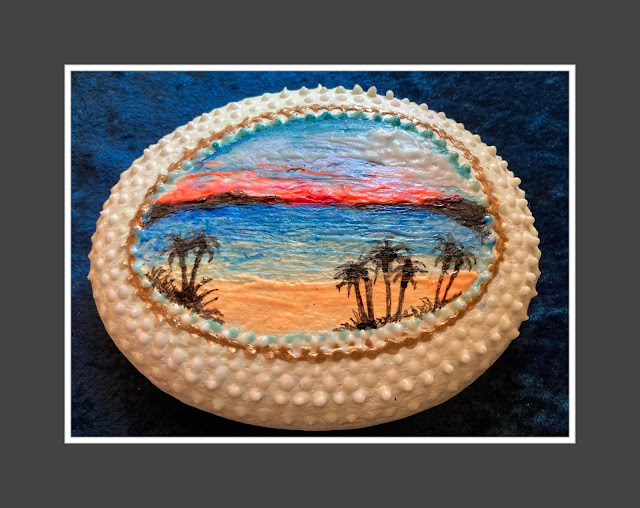 Posted by Christopher Sullivan at 12:49 PM No comments:

The weather outside is frightfully hot and there is an eery silence throughout the hood. I'm playing Stevan Pasero's delightful guitar melodies as a background to this writing and as a gift to all the diverse music appreciators in the neighborhood. All of sudden R.L. Burnside is chiming in with his blues harmonica on a separate selection. Quite eclectic wouldn't you say? Next up are the Stones, "Memo to Turner" which was featured in one of the movies few movies that Mick Jagger took a leading role ( hmmm...was their one that wasn't? ) Much like Jack Nicholson, their persona at times will overpower the character they are playing.

Where was I going will this? Anyway, the heat is sweltering and the nylon tiger shirt I'm wearing is already beginning to dampen with sweat. Time to turn on the fan. Air conditioning is not an affordable luxury for this one. A swamp cooler was purchased last summer for the customers who came to visit the vendor's booth at the Farmer's Market. Unfortunately, it is massively large and a pain to drag and hook up, no matter how pleasing that may be. The damn thing is totally functional even if I did want to return it after it first arrived. It came as a recommendation from someone whose opinion I respected until he insisted it would be the best fit for the 5x5' walk-in canopy. Hindsight, as they say, is 20/20

This behemoth now sits with it's back to a bedroom window, proudly hoisted on top of a barstool and plank board for height adjustment ( see below ). Now I sleep with my head at the foot of my bed to facilitate the position of the swamp cooler. Ahhhh... summer breezes throughout the night! 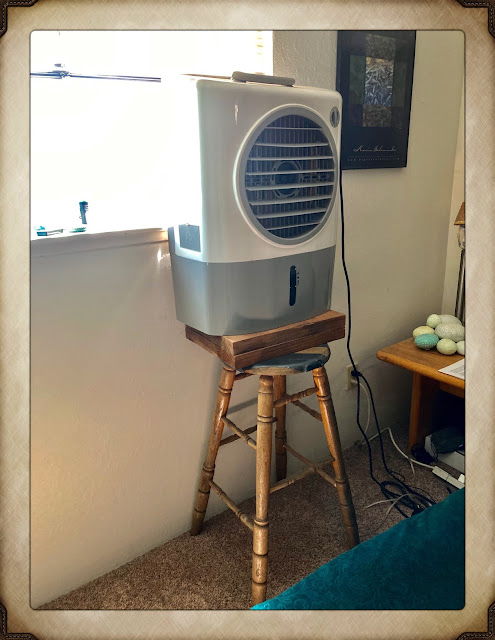 Posted by Christopher Sullivan at 12:32 PM No comments:

Perhaps a nibble of relevance

Today is the day after the first week in August and the days are running together like nothing I've ever witnessed. My gosh, wasn't it just St. Patrick's Day? The acceleration of time when the world was analog gave everyone a moment to digest their experience. Now, this sense of time urgency has propelled us forward at warp speed. Yet, this is 2020 and we are all walking around on a fragile planet, where a virus has everyone in check.

This all is leading up to some observations I've had looking back. Having grown up in San Francisco was like being at the center of a vortex. In 1959 when I arrived, there were the beatniks from North Beach. My teen years were spent during the sixties, which was the advent of the hippies. The seventies were the disco years and the beginning of the gay renaissance. The eighties were the "Me" generation, and all the est grads that came with that evolvement. The nineties ushered in the tech boom which really upset the apple cart. San Francisco became much larger than itself. If you took your vacation in Bali for instance, and someone asked where you were from (and your home residence was somewhere in Novato or Redwood city...) you could claim San Francisco with no clue that you were exploiting or modifying the authenticity of that statement. Hey, the Warriors and Forty-Niners can always be considered San Franciscans, despite their physical location or areas of origin. Keeping in mind that San Francisco is no longer a TOWN like it was back then, where you could easily walk from the bay to the breakers in around two and a half hours. Where people could look at one another in the eye as they passed each other on the street. Where you could ask directions and instead of pointing out a certain landmark, the likelihood would be that a person would "Walk you there" because it was easier than explaining it.

Then it became a showcase city and ultimately a spinning wheel, like the turntable at the old Funhouse at ocean beach. People who grew up here would try to hang on to the middle of that vortex of historical relevance, but eventually, spin out to the peninsula, Marin, or Napa ( which, at one point was known more for its state hospital than being a globally recognized wine region ). It's too easy to feel "known" in San Francisco, where looking or acting strange was your calling card. Now it's a designation for avoidance or even worse... disdain. My, how the pendulum of social adulation swings from one extreme to the other. All of this brings me to this idea that we are a network of populist thinkers who all consider themselves unique individuals parading around with a device that earmarks us as members of the status quo. It reminds me of a child star who is destined to lose their innocence before the age of five.

When I was ten, The movie "The Time Machine" with Rod Taylor came out. One part of the movie really sunk in. It was when, in the future, this peaceful community of people gathered by a river enjoying what looked to be a casual picnic holiday which was suddenly interrupted by what looked to them like a minor annoyance. Someone fell in the river and began to scream for help as she was drowning. These people on the grass nearby did nothing and blissfully ignored her cries. I remember asking myself, is this what the future will eventually become? The scene was not just frightening to me... It was terrifying. No one even paid attention to her! It looked like the ULTIMATE DISTRACTION was taking place, and no one was going to act upon it or even entertain a modicum of responsibility.

This is the fear I have about the Smartphone. It not only connects us anywhere at any time but disconnects us just as instantly as we are continually re-prioritizing the importance of each audio/visual element destined to bombard our conscious minds. I hate that I can multitask, and feel like so much is being accomplished. Truthfully though, the attention I purport to give you is not nearly as relevant as the time I am spending staring at a screen.

Below is a shot that I've wanted to share for a while now. This is Ray. He is an exclusive patron of the arts. Here he is relaxing as he is waiting for his dad to pack up the canopy so he can head home. 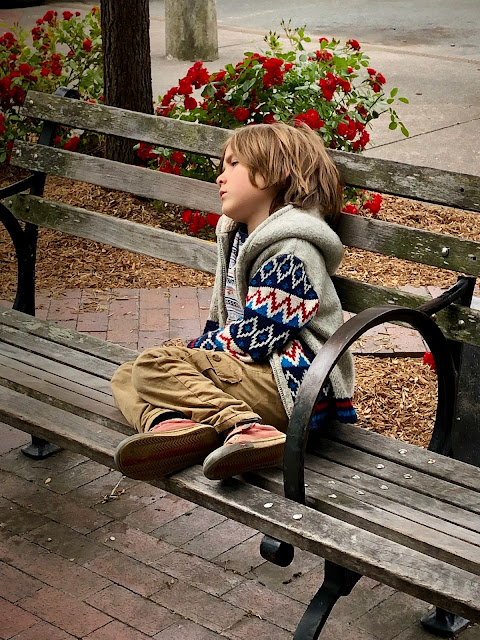