The Joy of Painting Spirit Rocks

Rocks, especially the ones that are perfectly symmetrical, flat, round, and smooth are not always the easiest to find. Yet, These are the ones I look for... whether on the beach or on the road. Painting rocks is and has been more than a hobby over the years. Since the beginning, It has been a quest and the most inspirational creative pursuit ever. Besides this, the exploration of a variety of mediums has easily introduced new ways of working.

This being said, the use of both phosphorescent and fluorescent paint has been the foundation from the start. Calling them "Spirit Rocks" seemed like a fitting nomenclature, as they seem to offer solace and serenity in a troubled world. Although other artists have taken on this practice, this has been my most transformational activity as an artist.

Your Spirit Rocks™ has been a blessing, as over 90,000 have been painted and sold during the past ten years at a variety of farmer's markets and craft fairs. Many have been donated and given away as gifts to charities, service groups, and friends. My studio is a corner of a one-bedroom apartment in Calistoga, Ca. It is there that these rocks emerge as a statement of the beauty that is still present in the world 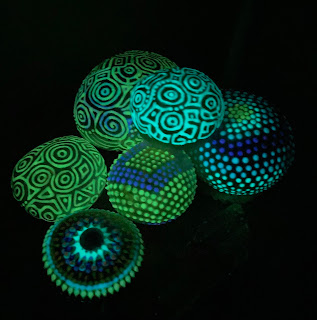 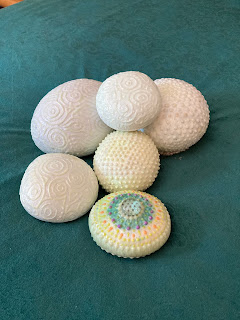 Posted by Christopher Sullivan at 1:11 PM No comments:

After reading today that the president expects to hold a rally in Tulsa on the same day as the Tulsa Greenwood massacre of 1921 is despicable. The "Black Lives Matter" movement continues to spur riots in major cities across the country due to police brutality and systemic racism that continues to challenge stuck outmoded beliefs. Fires raging in Arizona are the new norm as our planet continues to move towards a dark, ominous climate change. Over 400,00 people have died as a direct result of the mysterious COVID 19 virus that has spread worldwide. What is this?

Today is the eve of the summer solstice, which will usher in a season of massive change. 2020 is a year that has the whole world watching. Perhaps our vigilance in observing a "Sheltering in place" dictum will bring people closer to each other or not...time will tell. Meanwhile, staying in touch with friends via the FaceTime and Zoom apps has made our global village a catalog of traumatic events. All this "On-demand" information is being viewed through a small screen device in real-time, so the social distance is much, much shorter than our minds can digest .

Our posts on social media direct our passions and prejudices, thereby creating a society of cliques rushing quickly to judgment. Where else and what else is there to do but eat, sleep, pray and meditate. Perhaps some exercise, and staying busy as we digitally move forward. Nuff said.

Posted by Christopher Sullivan at 12:50 PM No comments:

... Or so it seems. Lack of leadership, viruses, riots, global warming. Will it ever end? Yes and no. Having things seem out of control is only the beginning. Personally, like many of you, I've chosen to stop and smell the dandelions. Achoooo ! No, really. A planter box with salad-worthy dandelion greens is keeping my immune system on high alert. That, along with the Elderberry syrup that my niece makes, is rendering healthy and wholesome results.

Staying in place has provided plenty of time to work on a variety of products and projects. Below is a pendant made from taking a sandstone rock found on a beach near the Russian River.It was strung through a hole drilled into the rock with numerous glowing beads. The rock has two sides and the wearer can show off either side. The colors are vibrant and will bring attention to this talisman that is one of a kind. 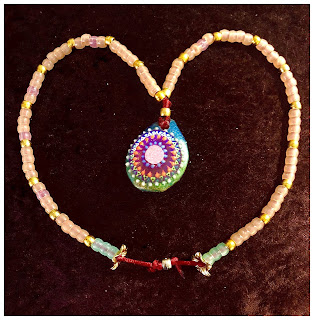 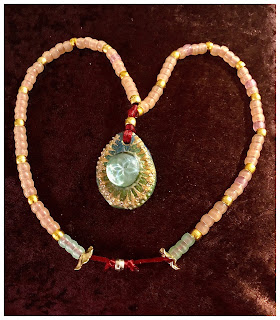 Posted by Christopher Sullivan at 5:04 PM No comments:

A Ticket to heaven

When I was in boarding school, during the eighth grade we had a monk who was our headmaster. Brother George Baldwin was a seasoned teacher, approaching ninety. He had knuckles the size of walnuts and would whack you on top of the head if you were goofing off in class. He was at times, the perfect target a fourteen-year-old boy would want to play pranks on ... however infrequent. One time during a study period (usually after lunch), we would be reading chapters from an assigned selection of books. This was also considered quiet time, except for light classical music playing in the background, which we, as mature upperclassmen learned to appreciate. Lower classmen would not yet get to enjoy this cultural privilege. One pleasant afternoon in Spring, Brother George had put out an array of Venus flytraps on the window sill which some of the students took joy in placing pencil leads into the place a fly was meant to land. The trap, due to its sticky lamina would close up instantly on any fly venturing inside. It became a sport to see if a fly's fate would be sealed inside one of these plants. Anytime a fly was buzzing around, everyone had their eyes on it, hoping that it would land in one of the traps. This time was different.

Brother George had been dozing off and we kept an eye on him as well, in the event of any classroom disruption. The damn fly landed right on the tip of his nose! Suddenly, his eyes opened and through his round spectacles, he looked cross-eyed at the insect and began batting the air. Needless to say, we all had to spend twenty minutes after classes because of students who were out of their chairs pointing and convulsing with laughter .

Things were out of control. This was a precocious class of teenagers, chomping at the bit for summer vacation. Brother George would have no tolerance for the percolating hormones at this age. In fact, he would take to writing a lengthy homework assignment, which seemed like revenge at the time. This would be written at the far end of the blackboard, closest to the door. Mark Erigero, a notable hooligan, was also a crack shot with a straw and spitball. As Brother George began to write the word "Assignment", Mark deftly dotted the "i" before George's chalk even hit the board. Brother George was furious. Again, the class disrupted in chaos.

Summertime came and went and a whole new group of delinquents got to take over the classroom when we departed for high school the next Fall. Usually, before graduation, the less unruly students who managed to maintain a scholarly decorum were awarded one of the flytraps and their choice of candy bars. A whole selection of Charleston Chews and Big Hunks were inevitably taken before the unlucky students got either a bag of stale peanuts or two pieces of saltwater taffy.

Brother George passed away that year. He was missed by all, but primarily those students who he instilled with a sense of purpose and pride. Not every boy passed. Those who didn't return would usually leave with a desire to do better and eventually go on to become freshmen after a stint in summer school.

Former students, faculty, and parents attended his funeral. He was not the only "Brother of the Christian schools" present. Many brothers from the San Francisco district were there. As the attendees were exiting the church, one brother was at the back handing out what seemed to be memorial cards. People were curious as they filed out with almost everyone smiling. These were tickets that the brother was handing out. They were "Tickets to heaven".It was obvious to everyone that Baldwin George had planned this as his gift to those who knew of his benevolence.

No painted rock this week. I just want to relay a story that meant something to me.

Posted by Christopher Sullivan at 4:07 PM No comments: