As you can see, I use different colors for different rocks. The paint I use is metallic acrylic. No two rocks are the same,even if I ultimately try to repeat colors and designs.The rock itself dictates it's own requirements. For instance, Sandstone is more porous than Granite with it's tooth (surface texture) able to absorb the acrylic paint better on the first coat. The paint on the rocks below only required one coat as it is quite thick. However, if you look closely, you can see that on some rocks, another color has adorned the edges.

The shape of the rock is another thing to consider. Craggy or obtusely-shaped rocks may require more than one coat of paint, as nooks and crannies are easily missed on the first application. Once the rock is given a solid color, it is sometimes fun to make it "two-toned" for more visual interest

.Using a complimentary color, this can be easily done by using an older,splayed brush and quickly flicking it up and down around the sides of the rock to cover only the edge. Then, using another slightly wet brush, simply diffuse the new color into the other by dampening it over the primary color. This process is better seen than explained.The two-tone effect should look almost airbrushed. So when we build and decorate these rocks,the surface will be ready for puff paint,glitter or whatever else used to add bling and texture. more to come... 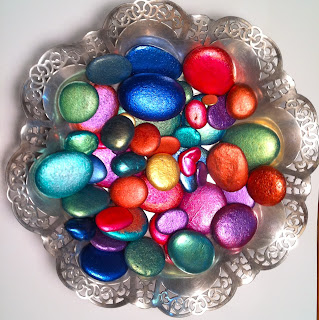 Posted by Christopher Sullivan at 9:13 AM No comments:

The Rock of the Week (Bert's Rock)

This pasted image rock was done some time ago and features a .jpg image of a vaudeville dancer ( who is a regular customer's Mother, taken in the early 1900's ). The photo was easily re-sized in Adobe Photoshop™ and printed out on glossy sticky back paper.

After adhering it to the carefully selected rock ( which was very smooth, flat and shaped perfectly for this image )Trimming it to the size and shape of the rock is fairly easy, even if you are a novice using a pair of scissors. Lastly, I proceed to clear-coat the pic and add a glowing element around the border.

The nice thing about this process is that any digitized image can be modified, printed, and made available to be showcased on a flat rock. Pictures of family, friends, dogs, cats or anyone you may want to memorialize. The rock will look very nice on a desk or nightstand. Decoupage is the name given to artwork that adds pasted imagery to the surface. The addition of acrylic paints, dots, and design work enhance this process. 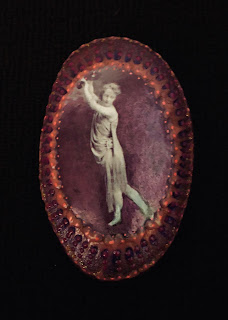 Posted by Christopher Sullivan at 6:55 PM No comments:

Scaling Down a notch

I do enjoy painting rocks, but at my age, I need to get out a little more often than I do. Today I went for a run around the track at RLS Junior High in St. Helena. The heat was unbearable but I ran 10 laps ( I really should say that I walked 5 and jogged 5 with numerous water breaks in between ) but it felt good. More about that later. Last Saturday, I brought out my little 5X5 Canopy enclosed to make a dark room which I call the "Night Gallery".Unfortunately, even with a fan inside, it still baked. Besides which, not that many people noticed or cared to walk inside.

Upon taking it down later, it occurred to me that I have far too much stuff to pack and unpack, so in the future, I will be bringing less inventory and using the small canopy as an open-air solution ( no need to put all the UV lights up when I have a hand-held model ). Lastly, I've been taking more time with my creations, so you will see the quality of the painted rocks improve considerably. However, you will not see as many on display. The rock below is a custom job that was done for a special friend who is partial to black cats. See you on Saturday! 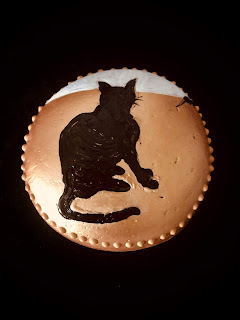 Posted by Christopher Sullivan at 10:29 PM No comments:

This past Saturday was spent at a music event in Boonville. The town can be found after driving a long and winding road towards Fort Bragg in Mendocino County. I arrived on Friday afternoon around 3pm and the festival crew directed me to the area where I would set up. My canopy and vendor's site ready by 4pm when as the show's manager/creator appeared there to greet me. This man has a large, demanding style, yet is fairly amenable when it comes to suggestions. That is if the suggestions make sense to him.

The voice and instruction style he has can be grating after a while, especially when that information is generally uninteresting and goes on ad infinitum. After other people began arriving, it became clear who was directing the show. One of the first things noticed was that no one of his performers from the two previous Fests was scheduled to be on this year's bill. Hmmmmm.Why was that? Anyway, we all followed his lead and the booths and logistical questions became clear.

I barely got much sleep Friday night due to the hard ground ( in spite of an air mattress ) and the ambient sounds that continued until dawn. There were coyotes, dogs, crows and other assorted creatures making a cacophony of sounds throughout the night. It was rough. Most of the set-up work was done save for a few extra chores.

Thankfully, I was offered some sympathy and a finely brewed cup of coffee in the morning by our aforementioned director, who actually can be a good-hearted guy. We moved picnic tables, garbage cans, and soft drinks as we coordinated the viewing area for the attendees. By noon, people slowly began to arrive. Even a few painted rock customers from the past!

Shows like these are gearing up to be a healthy, family-friendly event. A work in progress you might say. In effect, they do not draw wild, drug-induced fans intent on disrupting what otherwise may be a fun, stable weekend soiree. However, advertising this as a clean and sober event is not meant to be prohibitive in any way to those who are respectful of this idea. All in all, the future possibility of gatherings like these have great potential. Below is a picture of this week's rocks. I sometimes think that this would be the best rock to put on my desk. What do you think? 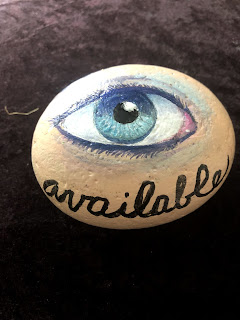 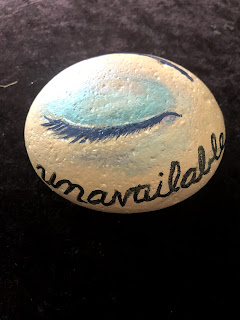 Posted by Christopher Sullivan at 9:34 AM No comments: