I recently enjoyed a Zoom concert (if you will ) that my friend Gene hosted, which featured a mutual friend of ours named Phil who happens to play the Saxophone. He played some standards for us, and they were just beautiful. He has been an accomplished musician for years, playing both as a solo performer and with a combo called " The gentlemen of Jazz." He currently is living in Hawaii, and most of us knew him from the mainland, mostly here in northern California The audience hailed from many places throughout the U.S. and at the end of the recital, we all hung out for a while and eventually bid each other goodbye as we proceeded to log off.

Afterward, with the creative juices flowing, an idea came to me as I went back to painting rocks. Given that the glow paint dries hard, it is not inconceivable to move the paint around to form a figure before it sets. Then I recalled Phil playing the saxophone. It took a while to push and pull the paint atop the rock with a skewer stick to fashion a semblance of someone playing the saxophone, but it could be done. The end result was what could be considered a cameo icon of a saxophone player… with musical notes included! Below is the final result. 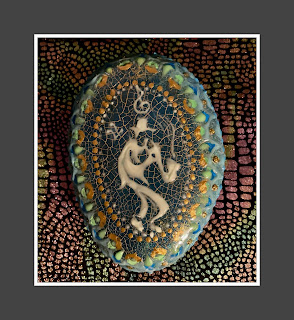 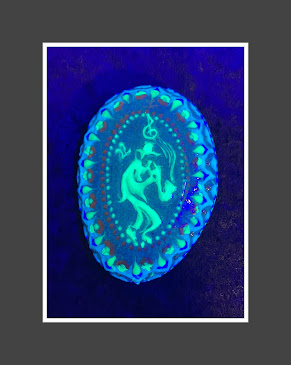 Posted by Christopher Sullivan at 6:06 PM No comments:

The rocks you see below feature three of my best to date. I have used a high-grade phosphorescent paint, a one-step crackle finish, adornments ( i.e. flower of life hologram sticker ), and a final coat of resin on each rock. The showing is how they appear in regular light ( an incandescent bulb ), a UV blacklight ( a large Industrial strength studio lamp), and moderate darkness to show what the rocks look like when activated. To activate a rock only takes a few seconds, and depending on the quality of Phosphorescent Paint will determine the intensity of the glow and the length of time it will glow.

Posted by Christopher Sullivan at 10:24 PM No comments:

It seems to me that the Keychains have become pretty popular as of late. It has come to my attention that kids like to hook them onto the zippers of their backpacks. Unlike the pendants, which people purchase to have something to wear that is light, colorful, and stylish. The pendants though have had a limited appeal. For a while, They have been ignored on my display table at the market. It still takes around the same time to produce both the keychains and the pendants.

The solution I came up with was to turn the pendants into keychains. No problem. I just got some extra lanyard cord, beads, and ring loops to transform each rock creation. The glow, bling, and image appeal are still there.

The resin casting has been a little tricky. Some resin will be set up quicker than other brands I've tried. The Industrial strength UV light will usually cause the resin to harden in less than two minutes. The resin I've experimented with lately works better if I place the rock outside in the sun.

The step I didn't mention is rock drilling. A diamond tip Dremel™ is perfect for making a hole even if it takes a while to drill through sandstone. Eventually, the bits will get chewed up if you don't place the rock on top of a wet sponge in a small bowl when drilling. Pushing the rock down to have the water covering the rock is the trick. It keeps the bit wet, causing less friction than trying to drill the thing raw. Below are some samples of the pendants I've turned into keychains. 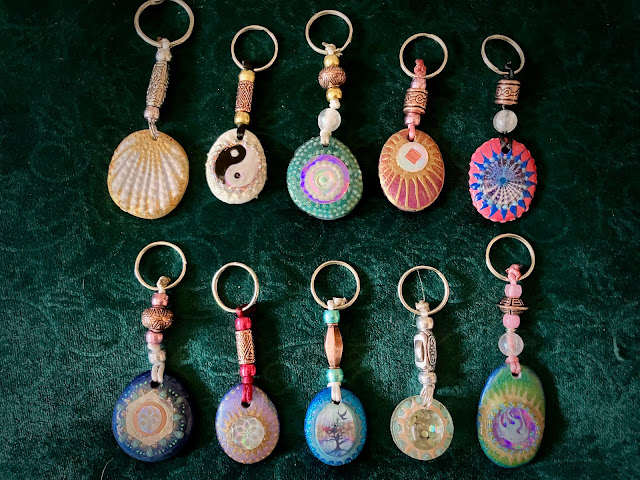 The pendant shown below was transformed into a keychain without much effort. The design is from an early watercolor I had painted. 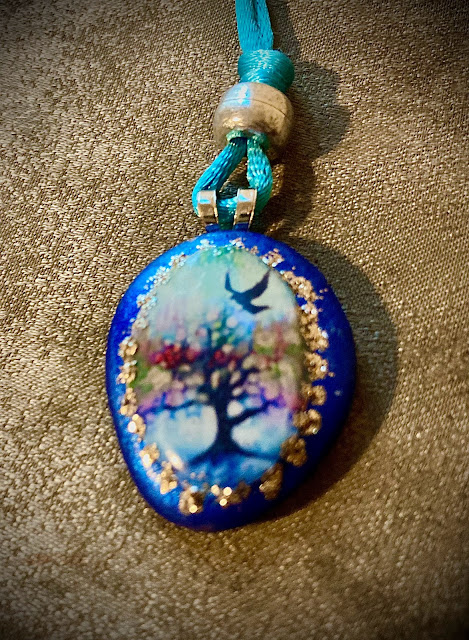 Posted by Christopher Sullivan at 4:29 PM No comments: