Most everyone in this area is experiencing a wild weather pattern with lots of rain and snow. My brother in Chicagoland is enjoying a nice comfortable winter's day in the mid-fifty degrees. He plays Santa Claus every year to bring joy and sparkle to everyone in from markets to businesses, residences, and clubs.

Yesterday at our local Farmer's Market, Santa did not make an appearance but there were still a lot of last-minute shoppers who appeared selecting a few gift rocks as stocking stuffers. A keychain blacklight was given along with any purchase that claimed to be glow-in-the-dark. Lately, it seems that some of the paint will not glow unless activated for some time. Thus the blacklight which will naturally make the colors "Pop".

Also, it seems that some folks have had concerns about the materials used on the rocks sold. The glow in the dark paint is non-toxic and will glow only when activated for a short time by outer light. ( This paint does not contain Radium™ which was used on watch faces many years ago. ) That being said, Some colors used will still glow brighter when activated than others. This does not mean that they are any more volatile.

Recently, Using just a small dot of resin as a final coat on many of the rocks has proven beneficial. This protective coat will make the rocks practically indestructible and water-proof. The shine is fantastic and when completely hardened, the resin coat is safe... yet is not advisable to have near high heat or as a decoration in an aquarium. It is best to leave the rock in an unobtrusive setting away from young children. Small kids may tend to think of it as candy. Best for children above the age of seven. Below is this week's "Rock of the Week". It was decorated with a family crest known as a mon. This was a commissioned piece, but the preference was for a blue, rather than a green background. 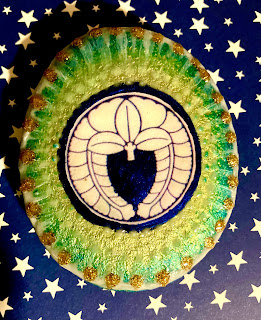 Posted by Christopher Sullivan at 1:56 PM