Back to the Future

I went to see "Back to the Future" starring Michael J. Fox a short time ago. Yes, I know what you are thinking... wait a minute, that flick was popular years ago. Well, it came back, and I saw it at Calistoga's first drive-in, at the Old Faithful Geyser on Tubbs Lane ( everyone stayed in their car, and observed social distancing and face masking ).

The movie was as predictable as it was over thirty years ago and figured that I must be too. Everything was okay until the battery in my car died. I called AAA and they said that they would come by after the movie and give me a jump. I wanted a new battery. No dice. No new batteries after 6pm. Whaaat?

Now without a functional battery, I could not follow the dialog with my car radio using the designated AM radio station. A movie usher came by and lent me a transistor radio to follow what was happening on the screen. Ah, such a useful technology then, and now one that harkens me back to a simpler time.

The movie ended and having to pee like a racehorse, I asked someone where the restrooms were. I was told to walk over near the geyser and I'd find them. Nothing like a geyser going off every hour to inspire your bladder. Anyway, I was by the geyser, but could not locate the bathroom, so I went over by the bamboo trees in the dark. Then, no sooner had I completed the task when a voice boomed out.

Hey ! the security guard shouted ( I found out later it was the owner of the place ) What are you doing !? I explained that I couldn't find the men's room and that he should be glad that I'm not going #2. Thankfully, he laughed and told me where it was to be found. I had passed them by. A little too late.

When I came back to the car, a friend had arranged for a jump from a friend of his and so I popped the hood. Voila! another task completed. I called AAA and canceled their service and left the parking lot. I had a new battery installed the next day at Napa Auto Parts in St. Helena. Fully charged and now I'm in my Ford Focus and back to the future.

This week's rock had nothing to do with the previous story. 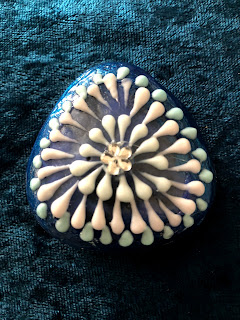 Posted by Christopher Sullivan at 12:32 PM