It is Friday, and I am thinking about getting a fresh batch of rocks to paint. Although I have ventured out seeking a variety of creative expressions, I think its time to get back to basics. This Covid19 thing is producing dreams right out of the Twilight Zone, yet rendering curious ideas to ponder.

Last night I had this dream that I had walked into a large corporate type building and made my way all the way to the top floor where I began walking directly into what may be considered the "Inner Sanctum". The walls leading to this particular office were made of mahogany and were reaching up to very high ceilings. A few people were walking from office to office, looking very buttoned up and official. Many were wearing ties and professional-looking attire. I then walked into an end office after going by several portals of privilege. When I reached the head honcho's office he was out. There was a security guard standing there, protecting yet another back wall of mahogany. Behind this wall that swiveled on a pivot was a vault that was open. Inside the vault were large stacks of cash, all bundled in paper bands like they had arrived directly from a mint. He looked at me quizzically, seeming to question my authority for even being there. I just stood there and said that I wanted a stack of bills in dollar increments. He said, " We only carry stacks of ten-dollar denominations, and would that be sufficient. I said that would be fine. He came out with a regular size stack of crisp bills that read "Ten" on them. The guard then took out a paper bag and put the cash inside the bag and handed it to me. He smiled at me cautiously, as I thanked him and left.

To me, This dream was all about trust. It symbolizes the trust I have in a higher power about providing the security and safety I require. Upon looking inside the vault, I saw huge stacks of money. It occurred to me that I could ask for, and receive whatever I wanted. The humility I felt made me realize that I didn't need to ask for any more than the modest amount that was handed over to me; although I could have. The confidence I was experiencing, carried me into and out of that building. This structure was a monolith of power and authority.

The thing that really surprised me is that I couldn't wait to tell my sister Tara, about the whole episode. More than the money, her response would be worth its weight in gold. The value received, not in being the amount of security, safety, and relief that this money represented... but in the joy of sharing this story with another. Fear and trepidation are what ruled the minions of this powerful corporation. Everyone looked to the other with an understanding of how devastating this power from the top represented. It was interesting that the chief was not even in his office as the cash was being handed out.

The notion that a lack of control at my"Being guided" was striking. In the face of this kind of power was the vulnerability of feeling fear, and the immense responsibility of coming to accept what was happening. It mattered not whether my actions were legal, moral, appropriate, policy-abiding, or otherwise. All that mattered is if my faith was strong enough to accept what was freely given to me.

Did I steal this money? Yes and no. The money was the power that was withheld from me and kept in safekeeping. In a sense, I had a right to that money, although it wasn't clear that it was mine, to begin with; Money is currency, and much like electricity it has no value of and by itself. It only has power in it's earning, spending, accumulation, and distribution. Having more money in this regard does not render what we think that "Having it" will provide. What does gaining the whole world mean here? Our response to having an opportunity to have all the money in the world as it is; is worthless. It is our ability to serve others that ensures value.

The the image below depicts a fool with a dollar in one hand and a baton in the other, joyously marching around without a care in the world. 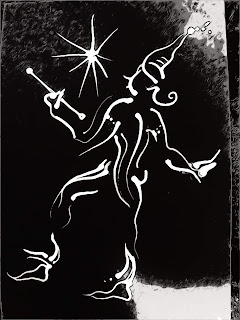 Posted by Christopher Sullivan at 12:36 PM