Having played with this medium in the past, using household bleach (Clorox, not hydrogen peroxide) as a material to paint with; Has opened a door into a creative pursuit that was not there before. Painting using old brushes is the best strategy because it is certainly going to eat those brushes right up! The best tool(s) so far have been skewer sticks, speedball pens ( except they will corrode with rust ), rubber-tipped smudgers and rubber gloves. The latter because bleach has a tendency to burn and sting after it dries out on your skin.

The best type of paper to start experimenting with is black or another dark color. Preferably children's construction paper. Save the heavy-toothed Canson paper for finished pieces later on. The fun is watching how it defuses and spreads, leaving fabulous gradations in the wake of each stroke. The rough-hewn appearance is somewhat reminiscent of the tie-dye craze of the sixties. Lastly, applying a variety of stencils can rendering especially compelling abstract pieces. 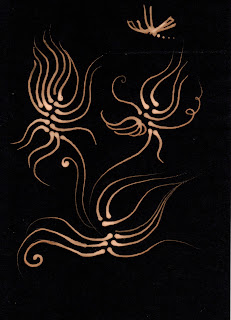 Posted by Christopher Sullivan at 10:26 PM