The Balance of Nature

Admittedly, I have taken the rocks I've painted from a certain beach along the northern California coastline. I've even stacked rocks (built small desk-size cairns) occasionally, but only in my studio. Every time I have visited the beach, a large expanse of rocks have disappeared and a great number of rocks have reappeared as the variety of tides has brought them closer and further away from the beach and near the trees close by. This has been the case over the past ten years I've visited this place. The seasons have also disrupted the flora and fauna as wind, rain, sun, and surf have had their way with the flourishment of living creatures throughout its ecosystem, of which I too am a part of; however infrequently.

Personally, I don't subscribe to the notion that I've intentionally or unintentionally upset the balance of nature by the action of selecting a few rocks to be used as canvases for the creations that emerge after adding paint to them. Everything that is not physical, is spiritual. I say that, not be glib but because space and time can be limitless (and limited) simultaneously. These are just thoughts that occur to me as I let the rocks dictate the direction and thought process that goes into painting each one.

The following is an article which brought me to some careful consideration about a variety of subjects about the disruption of the ecosystem. 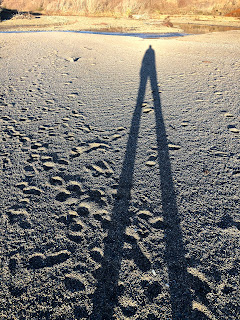 Posted by Christopher Sullivan at 11:00 AM