It's rare finding a rock that conforms to one's idea of the ideal heart-shaped rock to be painted. If there has been any rock more worthy of an adornment of glitter and paint, it would be the rock seen below. It was found washed ashore at Russian Gulch, where most of Your Spirit Rocks™ are collected. The symbol of the heart is unmistakable in most cultures throughout the world today. It can be seen almost anywhere.

I don't know if it was the graphic artist Milton Glasser that came up with the "I ♥︎ NY" logo, but this became as popular as the smiley face 😀 popularized sometime in the 70's, and in movies like Forrest Gump. The heart symbolizes the best humanity has to offer each other. This is a symbol of altruism, empathy and goodwill. Hearts also denote a feeling a yearning and devotion for that which is loved. Unlike having a 'Heart of stone" which is the title of a song by the Rolling Stones. The heart of stone shown here is a gift, not a condition of forbearance.

The Hearts of stone which I paint are keepsakes for those who treasure the love they have and want to keep in their life. These can be gifted and regifted. Passed on from one generation to the next.

It also has to be said that the rock or its shape doesn't have to mean anything at all. 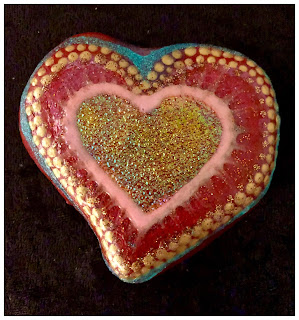 Posted by Christopher Sullivan at 2:16 PM