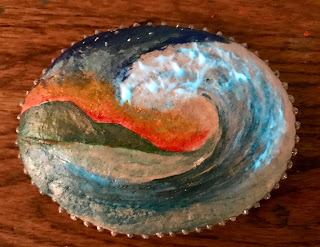 I have continued to paint rocks using a tried and true method of rendering a more traditional, figurative image... in this case, a wave off the coast of an island at sunset.As an afterthought, I further finessed this rock by painting a small surfer tucked in the curl of the wave.He doesnt appear in this image, however.

This rock has allowed me to experiment with the qualities of both reactive (florescent), and phosphorescent paint. The image takes on a more brilliant appearance under a blacklight,which showcases the sunset as well as the foam cascading over the breaking wave.More of these types of rocks will be showing up as I move away from just the mandala or concentric type of motifs.This is the type of work I used to do in college, which has a much more illustrative style, that I had put on the "Back burner" for awhile. 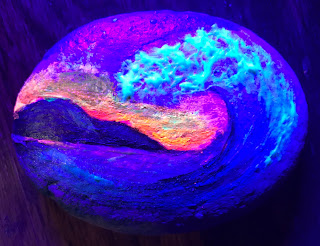 Posted by Christopher Sullivan at 6:54 PM