Last Saturday I started out by going to Orchard Supply to pick up Carpenter's Chalk and some masking tape. Then I drove to the Riverfront area of downtown Napa. I checked in with a woman named Jill who showed me the designated spot where I was to rough out my chalk creation. It was a 4'X 8' space in front of the local Gelato store.

My friend Veda was going to be working on her creation next to me,around ten feet away.I began cautiously as I had only attempted this type of work on this type of surface once before in San Raphael last June ( it was well over 90º).

My neighbor Don Williams ( a flooring carpenter ) lent me his knee pads which proved to be so necessary for this sixty-two year old body of mine.I also had some latex surgical gloves that protected my hands along with gobs of #30 sunscreen which protected me from the harsh rays of the sun.Now I was ready for business.

I measured out a grid and marked off the squares using the carpenter's chalking device ( a first for me ) with a very helpful assistant named Brad.I began in the upper right corner as I laid down lots of blue aqua chalk smoothing it over with my hands as I went.Two hours went by and I was already spent!

Veda hadn't arrived but I suspected that she was taking her time driving over from Novato. I left my work for the first day and then went over to my nephew Edward's house to celebrate my sister Rita's 70th birthday party (see pic below).I went home that night and hit the sack early,knowing I had lots to accomplish on Sunday.

Getting up at 5:30am is not my usual M.O., but it felt good as I drove back down to Napa on Highway 29 as the sun was just beginning to rise.When I got to my spot, I could see that Veda had begun her own creation late Saturday, but she still had not arrived. I began drawing and smoothing out chalk as the morning moved on. Jill returned early with muffins, water, Large shading umbrellas and coffee to help start the day. All the chalk supplies we could think of were provided.It was going to be a long day.

Eventually, Veda returned later on Sunday, and again I was feeling tired yet nearly done with my piece at that point.Initially I had agreed to help Veda with hers, but begged off at the last minute.Even still,It looked like she and her friend Bill were about to bail out after an hour or two.The effort everyone put into these projects deserve an "A" for all their work.My nephew and his family arrived around 1pm and helped me with some finishing touches (see Mila and Miko below).I am very grateful for how it turned out, and may even do it again next year.This time I am certain that was better prepared than last time, but still have a lot to learn about chalk and sidewalk art. 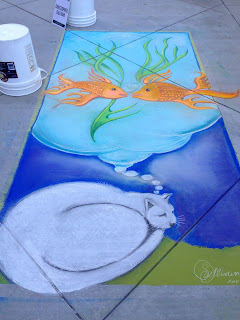 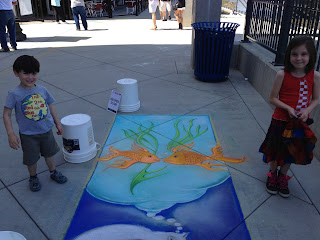 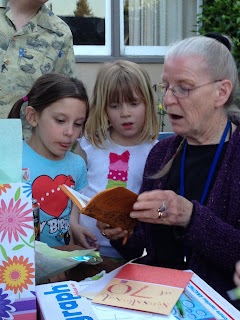 Posted by Christopher Sullivan at 10:36 AM