The Process of Elimination

We have all heard the saying about throwing something against a wall to see what sticks, as being a way of deciding something that otherwise may be difficult in the process of making a particular decision. The same has been true in following my own creative instincts. That which sticks has been, and will continue to be, akin to "Taking what you like and leaving the rest". Some will see this as being a bit foolish by not exploring or questioning what has evolved up to that point. More about that later.

Honing and refining one's skills and choices in the creative process is very important. Happy accidents can and do occur depending upon how much time and energy you may devote to a process ( which in many cases gets abandoned because of an ineffable result ). However, two things may occur in that process. Your skills using a particular tool or medium will advance and/or it may remain a "Work in progress" until you are able to produce something masterful.

Making something masterful is the result of trial and error. It takes a lot to make a rock look beautiful. Sometimes the process can interfere with the outcome and the rock looks disastrous. Thankfully, that hasn't occurred so much lately. Below is really a state-of-the-art rock, of which I am very proud. 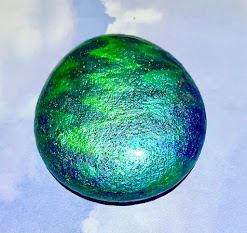 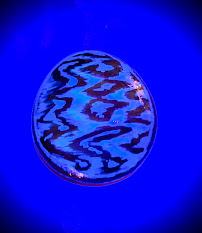 Posted by Christopher Sullivan at 2:50 PM