Okay...For the longest time, I've been talking about moving on from painting rocks to some other medium, method, or material. Recently, a text was sent to the manager of the Sebastopol Market with the idea of trying my hand as a quick sketch artist. Perhaps you may have seen one at an amusement park. I have never done this before and am quite nervous about even attempting it. She texted back seeming very enthusiastic about the idea. Her remark was akin to the Nike slogan..." Just do it!"

Good ideas seem to come in waves, and if one fires me up then that's the one to go after. So, in that vein, another idea came to me. This idea was still within the context of rock painting. It has been relatively easy to mount sticky-back images of celebrities, pets, or loved ones onto a flat rock. Then after encircling the image with gold or glow dots, the rock gets sealed in resin. They come out looking something like this one below. 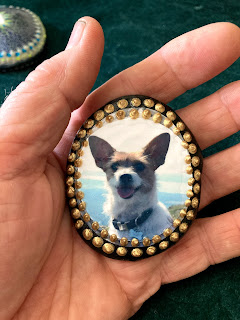 Who would like something like this to memorialize a pet or friend that has passed on. However, this would mean that the picture would have to fit on a particular rock. No problem. Except that I am stuck in the ennui of collecting, painting, and selling rocks. This has been going on for over ten years!

The last idea two ideas that have floated my boat have been making mobiles, chimes, or producing small framed pictures. Settling on a singular idea is challenging to say the least. I will be attempting one of these ideas in the very near future. Stay tuned as these ideas either catch fire or sizzle out.

Posted by Christopher Sullivan at 5:21 PM