Today is the day after Valentine's Day and I am happy to say that I did receive a nice valentine from a close friend. Even though it was misty and overcast at the Sebastopol Farmer's Market, it was still a pleasant day, and getting out of bed in the morning wasn't half as bad as I thought it would be. The week before was quite fruitful, so it was thought best to return...despite any forecast to the contrary.

Quite a while ago, a video was made of a wizard-like creature that was painted with both fluorescent and phosphorescent paint. It was painted on a small canvas purchased at the Dollar store. Then it was made into a video shot on the IPhone™ The video featured different lighting effects made using a small UV flashlight. Even a strobe effect was featured that really made the various views exciting.

The final step was to make a Lifeprint™ Hyperphoto that would activate the small printout when held up to my iPhone. The "Hyperphoto" triggers a link that will animate the still printout of the image. What can I say? what was produced still blows my mind. Watch the video below 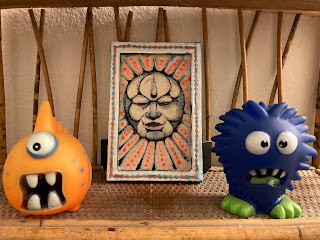 Posted by Christopher Sullivan at 6:00 PM