I call this one the "Bobby Dazzler" which was an Australian television series which ended in 1978. That was also a term which Australians use to denote "Bling". It can remind one of a fancy mafia pinky ring, or perhaps the ornate star nebula viewed through the ceiling of an Arabic mosque (yea, right). Truth be told, it is not too different from many of the meditation series of rocks that have been sold over the past few years.

As pretty as this rock appears under the blacklight, this design has gotten pretty boring to me and does not seem to tax my creative reservoir. In other words, these puppies can get cranked out fairly quickly. This does not take away from how much these rocks are valued, however. I would not be making them if it were not enjoyable to produce lots of them.

Most of the time during the day is spent coming up with new, relevant imagery, techniques, and mediums. Gift cards and small framed pieces have captured my interest lately, which will be posted here in the future. I sometimes find it puzzling to acknowledge that perhaps "multitasking" (i.e. distraction) can be considered part of the creative process.What do you think? 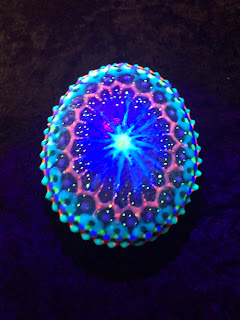 Posted by Christopher Sullivan at 10:46 AM