The Farmer's Market in Sebastopol always proves to be an adventure of one sort or another.It was expected to rain, but thankfully, that did not happen until later on in the day.Right around closing time in fact. The morning was delightful as many people began to arrive as the sun was shining.Even the balloon guy who makes little twisty animals for the kids was there. Normally, we have some very accomplished musicians playing under the gazebo there.Today was no exception except it was only one fellow playing his acoustic guitar. He was quite good and deserved all the attention he was getting.

Many people stopped by to view my gift rocks and observed them under the black light viewer.After awhile a very attractive woman appeared to have a look at the display, and mentioned that she was fond of the color purple and inquired if I had any purple rocks to show her.I did!

The rocks you see below (as well as the night-light shell) is what she ended up purchasing.As we talked it was discovered that she had an accent.Naturally, I tried to turn on the charm by guessing that she was an Aussie.It turned out that she was originally from Wellington, New Zealand and she was with her husband, who FORTUNATLEY was sitting over on a bench nearby... which was a relief.His name was Steven and turned out to be quite the card.I think he was a little used to having people be blown away by the beauty of his attractive wife.

When I introduced myself to "both" of them, he jokingly said that of course, I must mean his wife and her dog.I came back with," I didn't mean to insinuate that you were chopped liver, and someone to be excluded." Thankfully he laughed and we all had a good chuckle.They turned out to be the sweetest couple I have met in a long time.We talked for awhile, and it was learned that he used to work for NASA and she was a former Real Estate agent in New Zealand.The committee inside my head was chattering so loud, I could hardly keep up with the conversation we were having.We talked of the local culture, spirituality and a few other topics I couldn't remember, even if I tried.But after all,It proved to be a blessing to have met their acquaintance. 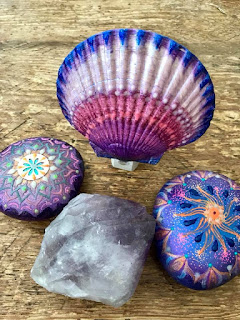 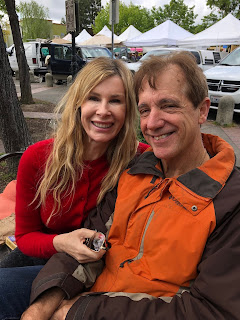 Posted by Christopher Sullivan at 5:55 PM