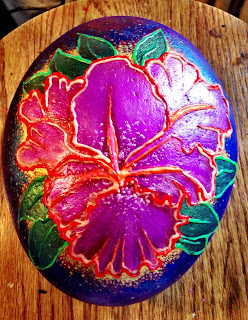 I love Saturday mornings and the Farmer's Market in Calistoga. Today was no exception.I met some great people and made some new customers. A teenager named Samantha who collects rocks and Russian Dolls made her acquaintance, and told me about how she was visiting from Sacramento where she is currently a senior in high school.She surprised me when she made the largest purchase of the day, which also happened to be my biggest rock.The rock was actually a bolder I purchased from a quarry. I painted a big beautiful crimson Iris on top and I could see that Samantha was not going home without it.I ended up giving her a black-light and the stand the rock rested upon, so she could appreciate it all the more when she returned home.

The other amazing incident occurred about ten minutes later when this young girl turned up at my booth to inspect the rocks.As she surveyed the table she picked up a sample rock I had put on the table in hopes of generating some custom orders for Mother's Day. The picture below is of this little girl who celebrated a birthday party in the neighborhood many years ago, whose image I thought would look nice on what I am now calling an "Heirloom" rock. Well as luck would have it,here was Claudia, who proudly announced that the little girl on the rock was her! She immediately went over to show her mom who just about broke into tears she was so taken.I don't even recall the exact year when it was taken, but when I printed it out and adhered it to the rock I figured that some parent may want a shot like this to memorialize a cherished moment. Claudia was two at the time, and is now a proud eight-year old third grader at Calistoga Elementary. 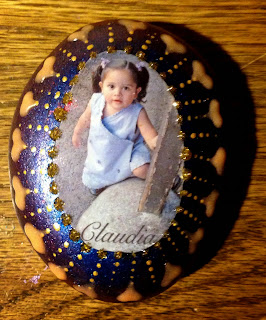 Posted by Christopher Sullivan at 10:48 PM