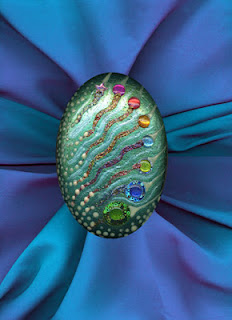 A friend of mine named Fred had purchased one of the posters I had on exhibit at the library. He not only purchased it, but had it framed beautifully. I was so impressed by the quality of the frame that I have vowed to have other images done exactly this way. The show went as well as I could expect and I have learned a lot. I am inspired by what others have shown me by their appreciation of this work. The biggest thing I have learned is to trust the process and to be willing to let go. This is not an easy thing for me. Things don’t always work out the way I think they should, but now I am more committed to my work, and the more inspired I’ve become. Although I sold only two pieces, I have learned to keep it simple and just scan the rocks and enlarge them. The pieces I sold were of the same Rock I call “The Sea Egg". It is the one shown here, and everyone liked this one the best. If you would like a signed 18 “ X 24” print for yourself, leave me a comment and I will be in touch with you. The prices have been lowered since the end of the show.
Posted by Christopher Sullivan at 9:46 PM